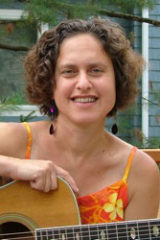 Erica Weiss has been teaching music workshops and playing for dances up and down the East Coast and in the American South for more than fifteen years. Proficient on guitar, fiddle, and vocals, Erica currently plays and sings with Appalachian old-time, Cajun and country bands including Square Peg Rounders, Lightning in the East, Jesse Lege & Bayou Brew, and Killer Bees. Sought after for her solid driving rhythm guitar, she has backed up winners in both fiddle and banjo contests, and has placed numerous times with pick-up bands at the Old Fiddlers’ Convention contest in Galax, VA. Erica loves teaching as much as playing and performing, which she discovered during her years as director of the Yale Slavic Chorus. A patient and enthusiastic instructor, Erica is known for helping experienced learners, as well as novices, broaden their knowledge base, further their ability, and continue to find joy in making music. Also a dance caller and instructor, she has brought the joy of dance, including square dance, contra, international, Cajun, and Zydeco, to participants of all levels and ages as well. Erica has taught and performed at camps and festivals including Pinewoods Folk Music Week, Stephen Foster Old-Time Music Weekend, Chesapeake Dance, Music Camps North, Ashokan Fiddle & Dance New Years’, The Dance Flurry, Lincoln Center NYC, Black Pot Festival Louisiana, and many others. When she is not on the road, Erica teaches private lessons to children of all ages in the Greater Boston area.

Erica Weiss will be teaching at the following camps:

Erica Weiss will be teaching the following classes: