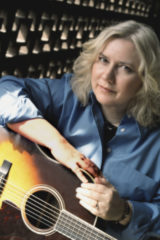 Something of a late-bloomer, singer/songwriter Kate Campbell didn’t begin her professional career until the age of 30. But in short order she managed to include the likes of Guy Clark, Emmylou Harris, as Buddy Miller as both admirers and collaborators in her distinctly literate musical vision. Since making her recording debut in 1995 with Songs From The Levee, Campbell has since put together a body of work marked by consistency, artistry and honest self-examination and self-revelation. Kate’s Moonpie Dreams (1997) and Visions of Plenty (1998) each garnered “Folk Album of the Year” nominations from the Nashville Music Awards. Kate is the daughter of a Baptist preacher from Sledge, Mississippi. Her formative years were spent in the very core of the civil rights movement of the 1960s, and the indelible experiences of those years have shaped her heart, character, and convictions ever since. As a child of the South, her musical tastes were forged in the dampened, smoky fires of soul, R&B, Southern rock and folk music. Kate released her first live recording, Two Nights In Texas in the Fall of 2011. A new recording of original music, 1000 Pound Machine is set for release in March 2012.

Kate Campbell will be teaching at the following camps:

Kate Campbell will be teaching the following classes: