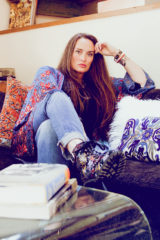 “From extravagance to simple elegance we went, as Kerri Powers took the stage with nothing but a guitar and a tapping tambourine strapped to the toe of her boot. Reading about her I assumed she’d be a folk strummer, but she began to lay down some of the finest country blues fingerstyle guitar we’ve had on our stage. It was shades of Rory Block, Chris Smither and, all the way back, Blind Blake and Gary Davis…On Top Was A Fascinating, Strong Voice Rich With Barbs And Prickles…Well Written And Beautifully Sung Stuff.” ~ Craig Havighurst/Music City Roots, Nashville

Kerri released a self-titled EP in 2014 and with zero radio or publicity assistance she was able to land the #1 spot on the Roots Music Report’s “Top 50 Folk Albums of 2014.” Over the years she’s appeared at numerous prestigious venues and musical gatherings including The Boston Folk Festival, The Philadelphia Folk Festival and Telluride Bluegrass Festival. She has toured throughout The United States as well as overseas, making appearances in The Netherlands, Belgium, and The U.K. Her song Diamond Day was featured in the motion picture Chuck, and other tracks have made their way into the television series Rescue Me and Justified.