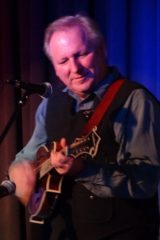 John Kirk is from upstate NY, near Saratoga Springs. His lyric voice, good sense of humor and versatile instrumental skills, have earned him widespread recognition in folk and traditional music circles. On fiddle, mandolin, guitar, banjo, keyboard and ukulele, John demonstrates a vast knowledge of musical traditions. He is also a dance caller, dancer and composer. John has several recordings, and he has contributed to over one hundred more. In addition to performing, John teaches music at Bennington College, VT, and at Skidmore College, NY. He has always made his living as a musician and songwriter. In addition to his work with his wife, Trish Miller, and neighbor, Ed Lowman, he’s also in the the bands:  Mountain Quickstep, The Susquehanna Stringband, and The Dawnland Singers. The Dixie Chicks recorded John’s song, “Long Roads,” and he has numerous theater, television and soundtrack credits.