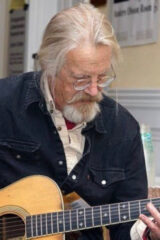 “Bennett is the sort of finger-picking guitar player you can listen to all day” – The Shetland Times.

He started playing in 1957 and began teaching in 1960, debuted as a virtuoso soloist in 1980 – on the In-Bound platform, Harvard Square Station – and has played above ground, at home and abroad ever since. Early influences include an EP side of folk and cowboy songs with guitar accompaniment his sister Lucy made in 1951, recordings of Etta Baker, Mike Seeger and Duane Eddy, and of course the Three B’s – Bach, Bluegrass, and Bo Diddly. More recently he has capitulated to the pleasures of playing the 5-string banjo, which he celebrates on his Rock-A-Folky Banjo CD on the Snowy Egret label.

Bennett’s classes focus on developing students’ individual skills and styles, helping you to play like yourself, only more so.

Bennett Hammond will be teaching at the following camps:

Bennett Hammond will be teaching the following classes: