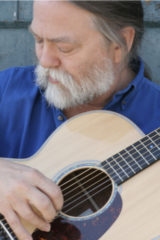 Scott Ainslie has studied with elder musicians on both sides of the color line – in the Old-Time Southern Appalachian fiddle and banjo traditions, as well as Black Gospel and Blues. He plays this music with affection, authority, and power. Ainslie has received numerous awards and grants for his work documenting and presenting traditional music. He has been a Public Fellow at UNC-Chapel Hill, and received grants from the National Endowment for the Arts (NEA, a federal agency in Washington DC) and the Folklife Section of the North Carolina Arts Council. Ainslie has six solo CDs to his name and maintains an active recording, performing, and teaching schedule that carries him around the country, to Canada, and to Europe.