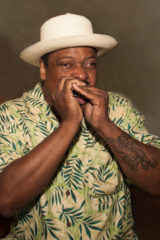 Washington, D.C. native Phil Wiggins is a versatile traditional harmonica player, continuing the Piedmont blues tradition, a gentle and melodic blues style of the mid-Atlantic region. He is only the third harmonica player to receive the prestigious lifetime honor of a National Heritage Fellowship, the so called “Living Cultural Treasure” award, the highest cultural honor the United States bestows on a traditional artist. Today, he is the only living harmonica player holding this honor.

From 1977 – 2009, he was part of the duo “Cephas & Wiggins” with John Cephas as guitarist and primary singer. The duo performed together for 32 years as internationally renowned stars of the country blues, and as a staple on blues radio, ever present on the concert and festival circuit. Cephas & Wiggins played Carnegie Hall, Royal Prince Albert Hall in London and the Sydney Opera House, as well as small venues worldwide, touring every continent except Antarctica. They recorded more than a dozen critically acclaimed albums, including on Flying Fish and Alligator Records, winning the prestigious W.C. Handy Blues Award in 1984 for Best Traditional Album of the Year and in 1987 as Entertainers of the Year. They even performed at the White House with B.B. King. Phil Wiggins, as well as Cephas & Wiggins, have been featured in major music magazines, including on the cover of Living Blues, and the Washington Post, the New York Times, the Chicago Tribune and many more.