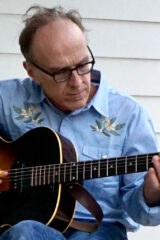 Peter Keane is a folk/blues guitarist, singer and songwriter from Austin, TX. Originally from Cincinnati, Ohio, he spent a decade after college on the east coast playing the coffeehouse and club circuit, releasing his first album in 1991. After relocating to Austin, TX in the mid 90s, he continued touring around the country and released an album on the Rounder/Flying Fish label in 1996. Since the mid-2000s touring has taken a sideline to raising a family, although he has continued to perform in Austin and produce new recordings. His sixth and most recent album, Blues | Ballads | Cowboy Songs was released in 2021. Career highlights include two performances at the Newport Folk Festival (1993, 2000) and playing guitar on and co-arranging Bill Morrissey’s Grammy-nominated Songs of Mississippi John Hurt recording (2000).

Keane’s fingerstyle guitar technique shows the influence of his heroes: Doc Watson, Skip James, Ramblin’ Jack Elliott, and especially Mississippi John Hurt. With a large repertoire of both original songs and tunes by these masters, he has gained a following not just as a performer but also as a teacher, both through workshops and an active YouTube channel.