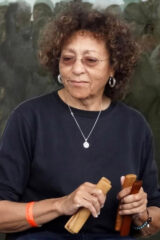 Jackie Merritt is a multi-instrumentalist (harmonica, guitar, bass, uke and bones), a multi-talented songwriter and a visual artist. For the last twenty years, she has been a member of M.S.G. Acoustic Blues Trio. In 2017, their CD release THE FLOOD received a first-round Grammy nomination for Best Traditional Blues Album.

Along with playing with M.S.G., Jackie and Resa (Gibbs) also perform together as a duo, “Jackie & Resa”. In 2010, she and Resa were accepted into the Library of Congress “Americana Women: Roots Musicians – Women’s Tales and Tunes” as part of the MusicBox Project collection (some of which has been catalogued in the American Folklife Center).

In 2015, she had an original song featured on the first-ever internationally acclaimed CD, Blues Harp Women which celebrates female harmonica players from around the world. It was produced by Ruf Records, out of Germany.

A music instructor of harmonica and bones, as well as a visual artist and former instructor of painting/drawing, Jackie has received several prestigious awards for her contributions to the Arts/Music scene in the Hampton Roads area. Musically, she has been deeply influenced by Elizabeth Cotten, Mr. Richard “Bones” Thomas, Etta Baker, and Phil Wiggins.

Jackie is known by some as a Renaissance woman.