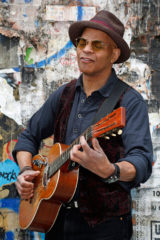 Whether Guy Davis is appearing on Late Night With Conan O’Brien or nationally syndicated radio programs such as Garrison Keillor’s, A Prairie Home Companion, Mountain Stage or David Dye’s, World Cafe, or in front of 15,000 people on the Main Stage of a major festival, or teaching an intimate gathering of students at a Music Camp, Guy feels the instinctive desire to give each listener his all. He’s a musician, composer, actor, director, and writer. But most importantly, Guy Davis is a bluesman. The blues permeates every corner of Davis’ creativity. Throughout his career, he has dedicated himself to reviving the traditions of acoustic blues and bringing them to as many ears as possible through the material of the great blues masters, African American stories, and his own original songs, stories and performance pieces. His influences are as varied as the days. Musically, he enjoyed such great blues musicians as Blind Willie McTell (and his way of story telling), Skip James, Manse Lipscomb, Mississippi John Hurt, Elizabeth Cotton, and Buddy Guy, among others. It was through Taj Mahal that he found his way to the old time blues. He also loved such diverse musicians as Fats Waller Throughout his life, Davis has had overlapping interests in music and acting. In 1993 he performed Off-Broadway as legendary blues player Robert Johnson in “Robert Johnson: Trick the Devil”. He received rave reviews and became the 1993 winner of the Blues Foundation’s “Keeping the Blues Alive Awards presented to him by Robert Cray at the W.C. Handy Awards ceremony. Looking for more ways to combine his love of blues, music, and acting, Davis created material for himself. He wrote “In Bed with the Blues: The Adventures of Fishy Waters” — an engaging and moving one-man show. The Off-Broadway debut in 1994 received critical praise from the New York Times and the Village Voice. Most recently Guy had the honor of appearing in the PBS special on Jazz and Blues artist, the late Howard Armstrong. And he was an honored guest at the Kennedy Center Awards, in which his folks received their medals, alongside other recipients like Warren Beatty, Elton John and composer John Williams from the President of the United States.

Guy Davis will be teaching at the following camps:

Guy Davis will be teaching the following classes: