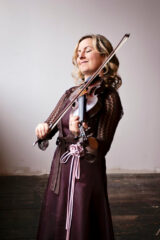 Erynn Marshall is an old-time fiddler who lives in Hillsville, Virginia and is known internationally as a performing artist and for her knowledge of fiddle traditions. Erynn learned the nuances of Appalachian old-time fiddling from her visits with 80-95 year-old fiddlers in WV, KY, NC and VA.  Erynn performs at festivals, teaches at music camps around the globe, and tours with her husband – songwriter and multi-instrumentalist Carl Jones. She has won many blue ribbons at prominent competitions including “Clifftop” (The Appalachian Stringband Festival) and was the first woman to do so in 19 years. She has written on book (Music in the Air Somewhere), performed on/produced 10 recordings, appeared in 5 films (Voices of Virginia, the Clifftop Experience I’ll Fly Away Home, Conversations with Old-Time Musicians, plus Never Met a Stranger) and is featured in the book “Singing at the Clothesline” by Susi Lawson. Erynn is Program Director for Alleghany JAM (Junior Appalachian Musicians),  a non-profit organization that helps children learn traditional music after school.

Erynn Marshall will be teaching at the following camps:

Erynn Marshall will be teaching the following classes: