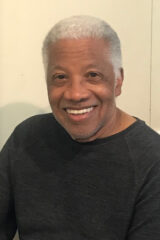 Louisiana-born Charles Williams has won international acclaim since his opera debut at The Festival of Two Worlds in Spoleto, Italy. He has acted and sung in theaters, opera houses, as well as radio and television programs around the world. He has performed at The Metropolitan Opera, Carnegie Hall, and The Kennedy Center. He toured Europe as a cast member and vocal coach of “The Temptation of St. Anthony,”  directed by Robert Wilson.  He toured with The Pomegranate Arts production of “Einstein on the Beach” composed by Philip Glass and directed by Robert Wilson.

For more than a decade, Charles has partnered with global-jazz percussionist Tom Teasley to form the duo Word-Beat. Word-Beat has performed and conducted music workshops in the U.S., Europe and the Middle East. Charles is a master teacher/artist in voice at the Levine School of Music in Washington DC. Students come from many countries to alo study with Charles in his home studio in Alexandria, Virginia. Charles travels the country giving master classes and conducting vocal workshops.

Charles Williams will be teaching at the following camps:

Charles Williams will be teaching the following classes: