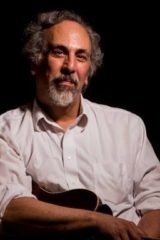 Bob Halperin knows the blues. A remarkably fluent guitarist and singer, Bob is a disciple of the pure blues tradition.

Bob came to country blues in his early teens after meeting and hearing Roy Book Binder. He studied with Rev. Gary Davis and began playing in coffeehouses while still in high school.  While living in Cambridge Mass. in the late ’70, Bob was a regular at the legendary Harvard Square venue, The Idler, along with friends Patty Larkin, Paul Rishell, Geoff Bartley, and others. He also hosted the Monday night Open Hoots, encouraging and nurturing many musicians emerging from that fertile scene.

In the late ’80s and ’90s, Bob was in the musician’s mecca of Portsmouth, NH. In addition to much solo playing he worked with many other musicians in various combinations and bands both electric and acoustic, including the Kevin Sysyn Band, his own fondly remembered jug band, Homeless Bob and the Livingroom Gypsies, and the Bob Halperin Trio.