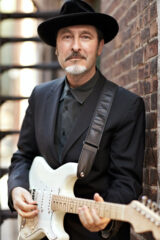 Peter Parcek’s daring, incendiary and soulful style is a distinctive hybrid. He weaves rock, gypsy-jazz, country, folk, and blues– especially blues– into a tapestry of melody, harmony and daredevil solos that push those styles to their limits without sacrificing the warmth of his own personality.

Peter calls his approach “soul guitar,” an appellation that alludes to his playing’s depth of feeling and character, as well as its deepest roots in classic American music. But Peter’s sensibilities are equally attuned to the future.

Peter has witnessed great American blues artists in concert: Skip James, Muddy Waters, Albert King, Jimi Hendrix, B.B. King, Albert Collins, Buddy Guy. “I would sit as close as possible so I could see exactly what they were doing on the guitar,” he says. “It was an amazing education.”

”What I try to bring to any music I play, but especially to blues, is something I learned from Skip James when I saw him perform at Wesleyan University in the ’60s,” says Peter. “He played beautifully, with real elegance, and conducted himself in a gentlemanly manner. But people kept talking, so at one point he stopped playing and announced, ‘Mr. Skip would appreciate it if you would stop perambulating when he is expressing.’ And then he left until things quieted down.

“That made something click in me. Skip showed me that it was right to play blues with dignity and style, and to express and conduct yourself as an artist. He obviously put his entire soul into what he was doing on a lot of levels. And that’s what I try to do whenever I pick up a guitar.”